Midnight sun in the polar Palmyra

Norilsk is one of the five northernmost cities in the world with a population of over 100 thousand people. Its history is closely connected to the development of Nornickel, the first non-ferrous metal mining and processing plant in the world built on permafrost. Today, Nornickel is the world's largest producer of nickel and palladium, and one of the key producers of copper and platinum. The city, which has grown next to and along with the plant, has become a landmark of Soviet industrialisation and development of natural resources of the Arctic. Over the past few years, Norilsk has also assumed a new role, as a tourist centre of the entire Taymyr, Russia's largest peninsula.

Saint Petersburg is not the only place where tourists can admire magnificent architecture during the famous "white nights" (midnight sun). Norilsk, the northernmost city in the world with a population of more than 150 thousand people, boasts midnight sun that lasts for two months rather than a couple of weeks. From 19 May until 26 July, evening and morning twilight become one, and the sun never disappears below the horizon.

The central part of Norilsk was designed by architects from Saint Petersburg. That's why the city centre is so reminiscent of St. Petersburg classics. When you walk along Leninsky Prospekt, the main street in Norilsk, it’s hard to believe that you are 300 km north of the Arctic Circle. A range of spacious squares, majestic architectural ensembles, tall Stalinist buildings… What a miracle to have it all built in the permafrost, on the Taymyr Peninsula—the northernmost mainland part of Eurasia. 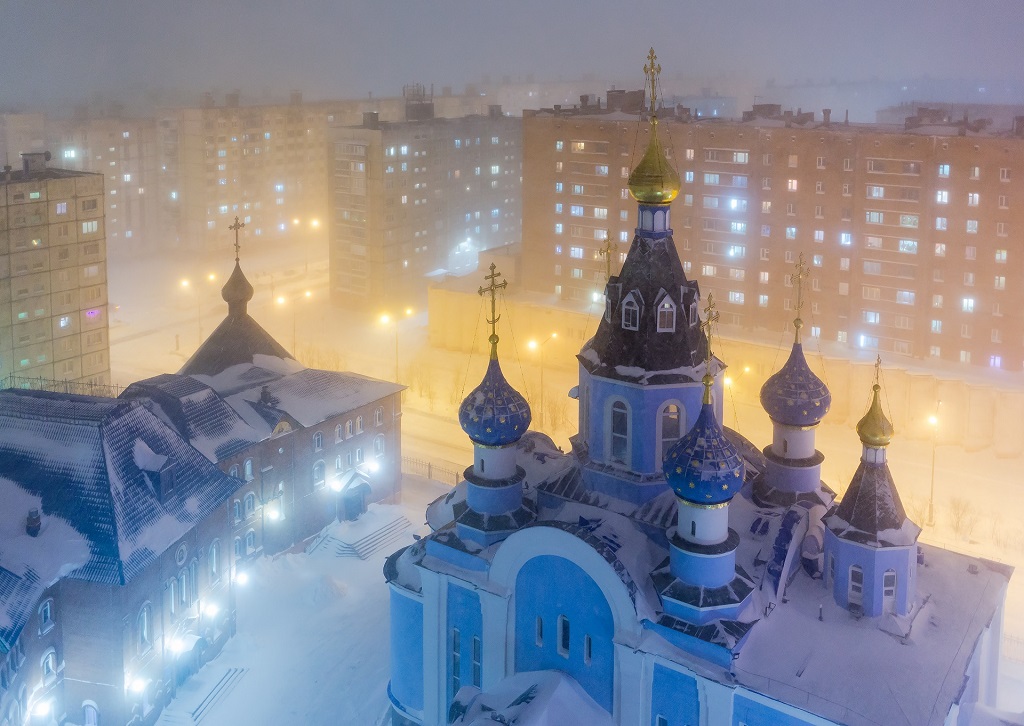 It snows heavily during nine harsh winter months when temperatures can go down to –56°C. The total amount of snow precipitation is approximately 10 tons for every Norilsk resident per year. City streets turn into a maze of cleared paths surrounded by 4-metre tall walls.

To keep the numbers of the buildings visible despite the snowfalls, they are huge and written right on the facades. Winds can be so strong they make you feel like a superhero: you've got to hold on to special handrails on the streets if you don't want to be carried away. No wonder Norilsk is considered one of the windiest cities on earth.

But even the harsh climate does not scare away the tourists who want to visit Norilsk.

After all, it is the gateway to numerous natural wonders of Taymyr, the main one being the legendary Putorana Plateau. The most convenient and easy way to get there is from the largest city on the peninsula. Norilsk itself is a treasure for the fans of Soviet industrial history since it appeared for the sake of exploring Taymyr’s unique natural wealth.

Souvenirs made by local craftsmen can become a wonderful reminder of this unique northern city: they are made of walrus bone, mammoth tusks and reindeer skin. Another great idea is to pay a visit to local jewellery shops: what's a better place to purchase precious jewellery than Taymyr which mines a variety of mineral resources. But the memories of your trip to Norilsk will still be the main souvenir. The lack of warm weather in the Arctic is more than outweighed by warm relationships.

It is also envisaged that smaller vessels will be used for transport on the NSR.

Investments in the project will amount to about RUB 2.4 bn.

Students are transferred to project-based learning.

Read more
Putorana Plateau The land of a thousand lakes, canyons and waterfalls
Komi Komi: The Seventh Wonder of Russia in the Middle of the Ancient Taiga
Zapolyarye Arctic Holidays